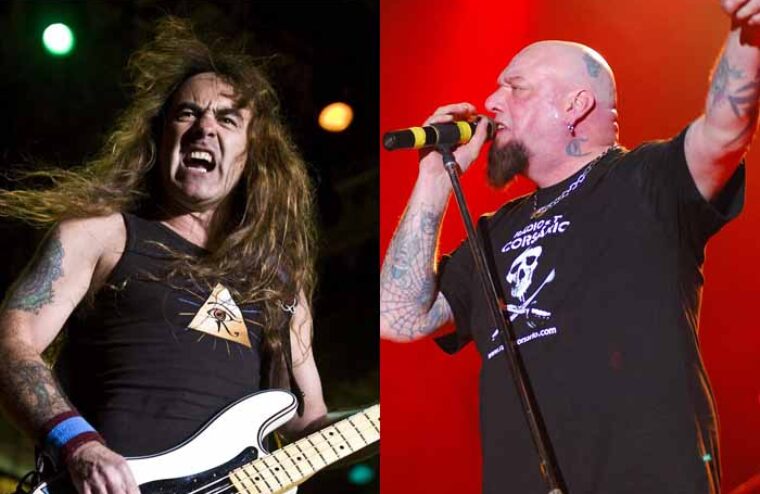 Last month, former Iron Maiden singer Paul Di’Anno met face to face with bassist Steve Harris for the first time in decades prior to the band’s concert in Croatia. Harris met with the wheelchair-bound frontman of Maiden’s first two albums prior to the show to chat for a few minutes, and the interaction was also captured on video. Di’Anno spoke about the meeting with The Metal Voice saying:  “[That] weekend was absolutely amazing.”

“Because me and Steve [have exchanged messages] about football [in the past]. But we actually hadn’t met [face to face] for a long time. And it was brilliant, because I met up with Steve’s sister Linda first, whom I hadn’t seen her in about 30 years. And then [seeing] Steve was amazing, and then [meeting up with Maiden’s longtime manager] Rod [Smallwood] as well, it’s made my whole year, actually. It was fantastic. It was pretty awesome.”

On Monday, it was revealed that Iron Maiden will fund the remaining costs of Di’Anno’s knee surgeries. Iron Maiden made its live debut in 1976 at the Cart & Horses pub in London. The pub’s operations director, who had spearheaded crowdfunding efforts to help Di’Anno, shared the news on Facebook:  “I am very excited to announce that the Iron Maiden team have kindly agreed to cover the remaining cost of Paul Di’Anno’s operation. Not only are Iron Maiden the best band on this planet, they are kind-hearted and supported by an amazing team. As a result of this fantastic news, I will be closing the fundraising on the 21st June 2022.”

Di’Anno was also asked by The Metal Voice if the meeting was awkward after having gone so many years without meeting in person. “No. It was great. I wish I wasn’t in this sort of position [being in a wheelchair]. Yeah, it was quite emotional. If it had been the first time we spoke together in 30 years, it would have been maybe a little bit more weird. But, as I said, we talk about football and stuff like that, and Steve phoned me up a couple of times from [his home in] the Bahamas.”

Maiden fan and band biographer Stjepan Juras revealed that Di’Anno will have three operations over two days in July followed by a period of hospital recovery and rehabilitation. If all goes well, Di’Anno should be back on his feet by the end of the year, but if the set of treatments fails, a leg amputation will be the only option.

Di’Anno recorded what are regarded as Iron Maiden’s classic albums — a self-titled effort in 1980 and “Killers” in 1981 — before being fired and replaced by Bruce Dickinson. He went on to front a number of other bands, including Killers and Battlezone, and he has released several solo records.