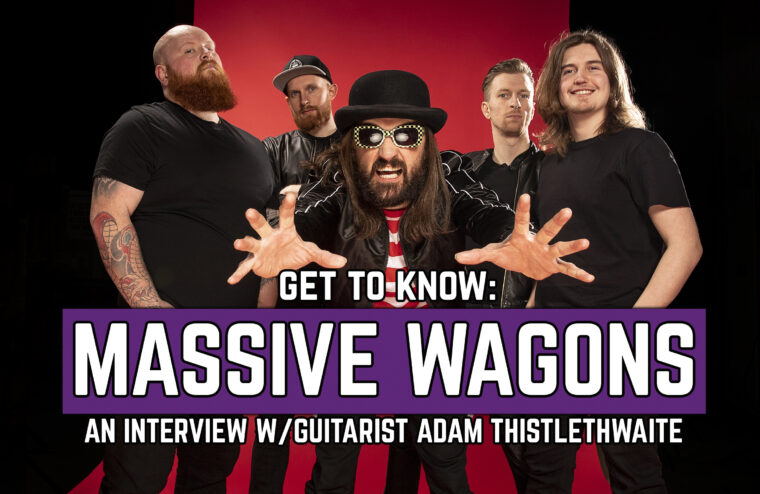 Rock’ n’ roll is an escapist’s game — a pleasant distraction from everyday troubles and a soundtrack to no hassles living.

So when the decision was mulled by Lancaster, England’s Massive Wagons to release their latest album, “House of Noise,” even in the current COVID landscape, it was all systems go.

“We did have a discussion,” said guitarist Adam Thistlethwaite on sticking to the album’s July 17 release date. “But to be honest, it wasn’t very long. In the beginning (of the pandemic), no one knew how long this was gonna go on for. It could’ve been a month, two months, or like it is, all year. We said, ‘Nah, we’ll go for it.’ We had a release date, and we stuck to it. People still need music, even when they can’t go to gigs. Sometimes they need it even more.”

Massive Wagons formed in 2009 and evolved from a cover act, slogging it out in UK dives playing for anyone and everyone that might take notice. The band’s slow build was aided in 2016 by Ginger Wildheart booking them as support for his solo UK tour. Soon they were sharing stages with Lynyrd Skynyrd, The Dead Dasies, Thunder and The Wildhearts. Word spread not only throughout Europe, but has slowly trickled its way across the pond to America, where die hard rock’ n’ rollers are taking notice.

“House of Noise,” released in Europe via Earache Records, is the fifth studio offering from Massive Wagons. Thistlethwaite talked recently about the record, how the band is surviving financially and what’s next.

“House of Noise” compared to previous releases
“In 2018, we parted ways with our rhythm guitar player and got a new guy on (Stevie Hill). About that time we were recording the last album (“Full Nelson”), but he kind of came in at the last minute and was never involved with the writing. This time around, he got a lot more input into the writing process, and it brought a bit of a new energy to things. Other than that, I think (singer) Baz Mills and myself, we’re just getting better. We’ve been doing this for 10 years now, and our craft is improving.”

On consciously making “House of Noise” a more danceable record
“That’s something that we did consciously try to do. The previous albums, when we went in to record them, it was always very rigid. We’d record the drums, then the bass, then the guitar, and it was just how it was done. This time around, the setup, we lived in the studio where we were recording it, so everybody got fully into the vibe. We’d spend a day on a song, and you’d really get into the song. When (drummer) Alex (Thistlethwaite) would go to track the drums, it was just swinging. We didn’t edit too much. If it strayed a bit off the click tack, we’d just leave it. Where as in the past we’d make it so it was technically perfect, but you’d lose a bit of the feel. This time we deliberately kept it more fluid.”

On surviving as a mid-level band in the COVID pandemic
“We do quite well with merch all-year around. In a weird way, our merch the last few months has gone right up. We’ve really capitalized on all the other areas outside of live playing. We’ve paid a lot of attention to it. We do OK on the financial side of things. It’s a huge loss with the loss of live fees, but it’s just forced us to concentrate on other areas. And it’s been a good thing in a weird way, because we’ve now looked at things like our website and our online content has been optimized. It’s forced us to pay attention to things that we weren’t doing as good. So it’s been a kick in the ass really to do that.”

On specific songs from “House of Noise”:
“In It Together” — “it was total coincidence (that it became a rallying cry for people during the pandemic). What it’s actually about is nothing to do with this, but it was always a strong contender to be track No. 1 on the album. As soon as the record label heard it, they were like, ‘This has got to be the single.’ I can genuinely say it was a strong contender for the single anyways.”

“Hallescrewya” — “That was quite a late song in the process. Baz writes all the words and he’s got real talent for thinking up great lines. That song was inspired by a show we did last year. We’d just been in Europe. When you come back to the UK on a ferry from France, you land in a town called Dover. It’s a small town, and it’s rough place. You wouldn’t really play there unless you found yourself passing through. We were doing a gig, and we’d never played there before. It’s a big warehouse and it’s half full. There were a lot of people there, but the venue was just massive. There was a guy in the back that Baz saw halfway through the set just put his jacket on and leave. Baz remembered this so he kind of wrote the song to that guy. ‘Why did you leave the show?’ We put that story with some music I wrote. Then in the studio we added the almost church, choir singing and the bells at the beginning. It’s quite a long song, otherwise it might have been a single.”

“Freak City” — “That’s one of the first riffs that Stevie brought to the band. When I heard it, I thought it was cool. I used to write that kind of riff all the time, and to me it sounds a bit like Kiss. It’s a very straight-forward riff. As a writer, I think i’m getting a little out of that writing like that myself, but then Steve comes along with this and it reminded me, sometimes just direct, simple riffs are the best. People only need to hear it once and they know the song. So it was good to embrace that again. ‘My head’s a disco full of people I don’t like,’ is a great line. Baz comes up with these things, and he doesn’t force them. His head probably is a disco full of people he doesn’t like.”

“Pressure” — “We’re signed to a label now, and some people say it’s a slight change of direction maybe towards a more commercial sounding album. I didn’t see it like that but some other people did. They thought it was because of label influence that we’re gonna try to write for radio, and that just wasn’t the case. So the song is kind of directed at people who think that it is. The line, ‘since the label got involved, they’re losing direction,’ is something a more disgruntled fan of the band might say. It’s kind of just commentary rather than having a go at them. It’s just us saying we don’t feel any pressure, we just write the songs we like. And you can either like it or don’t. But I think we’re gonna use it as an opening live track. Because it’s just so fast out of the gate.”

What the rest of 2020 and 2021 holds for Massive Wagons
“All of our plans have moved to 2021. The album did really well in the UK, and we got in the top 10. It did quite well in Germany. We’ll be touring the UK in March and elsewhere in Europe later next year. As for America, I’d love to go. I love American culture and history, and my favorite bands are all American. I’d be there in a heartbeat, but we have to think of the costs for this. The overheads are just so high. I don’t know where that point it where it makes sense for a band like us to come over to America. You need some guarantees, and right now that doesn’t exist, so we’ll have to see. But we are seeing more and more Americans and Canadians on social media just discovering us. People are just discovering the music organically, and that’s fantastic.”

For more information or to order “House of Noise,” visit MassiveWagons.com.