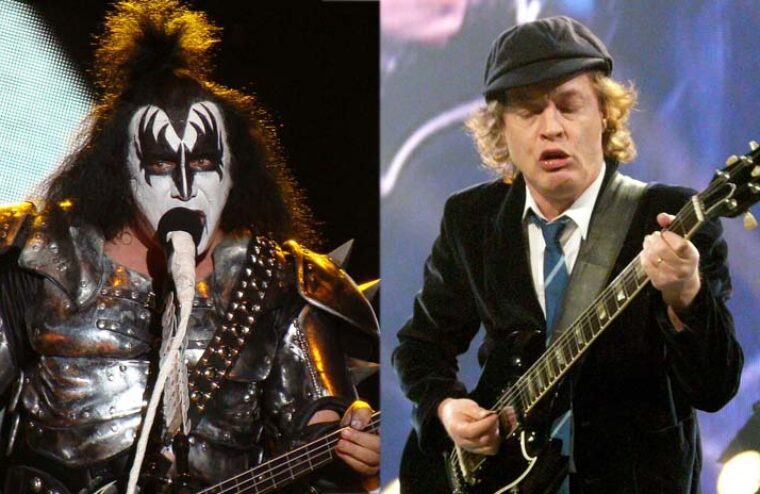 Legendary rockers KISS and AC/DC have a long history together. AC/DC opened for KISS on their “Alive II” tour in 1977 and ’78, and KISS bassist Gene Simmons first saw AC/DC at a small club in Los Angeles. Simmons was impressed by the band, particularly the playing of guitarist Angus Young, and the pair chatted after the show leading to AC/DC’s support slot. Despite meeting the band during the Bon Scott era, Simmons talked about his favorite AC/DC album with journalist Val Siebert in a 2015 interview that has recently been making the rounds again. It was AC/DC’s Brian Johnson-fronted 1982 album that left the biggest impression on the fire-breathing bassist.

“Bands have their anthems, you know, ‘You Shook Me All Night Long’, all that for AC/DC sure,” Simmons said. “‘For Those About To Rock’ is the call to arms, it’s the definitive anthemic album. ‘Back In Black’ probably had better songs, but the band started to have a sense of itself because a band stands or should stand for something. Like when you have a country you have a flag for that country. But when a flag stands for something, it takes on a meaning of its own, and then people realize that the flag doesn’t just represent the country, but it represents what the country stands for. The platform — in our case, platform boots. So, ‘For Those About To Rock We Salute You’ is what AC/DC is all about. The graphics and that cannon and the title — and it’s why they always end their set with it — it’s anthemic.”

“’You Shook Me All Night Long’ is probably the best song they’ve written in my estimation, but it’s not an anthem,” Simmons continued. “It’s because the lyrics aren’t on that same level. They aren’t big and bold. ‘For Those About To Rock (We Salute You)’ means something, it’s a connection. It’s like nationhood. Put your fist up in the air and say, ‘Yeah! This is what I believe in!’ ‘You Shook Me’ doesn’t have that, it’s just a rockin’ great song.”

Simmons likened “For Those About To Rock” to KISS’ own experience with their “Destroyer” album. “When the band realizes its own meaning, when a band can see itself clearly, that’s when it connects. It happened to us on ‘Destroyer.’ That album cover had no guitars on it, no drums, no guitars, no stage, nothing. That’s when we understood that we were bigger than the music we played. But you don’t see that until someone points that out to you. When you start to see your face in parades and on walls and on tattoos and all that. And when you see that there just aren’t any guitars or drums in there. People are attracted to the personas. The personas are bigger than the guitars. Whereas, it’s hard to have an image of AC/DC without a guitar. Without a guitar, you would say, ‘Who’s that?’ The same goes for Metallica or almost anybody. They’re musicians. We are iconic images. That’s fine for me. That’s bigger. That’s part of pop culture.”

Simmons previously told Australia’s Triple M radio station about his first encounter with the band.  “I saw them playing this really small club in L.A.” he said. “I happened to be there. And all I remember is being close to the stage, ’cause I love that — I wanna feel it; I wanna feel the chest kind of cave in when the bass and the kick drum hits it. I don’t wanna be at a safe distance. If it’s too loud, you’re too old. So I’m in the front. And even after the blackouts between songs, there’s Angus [Young] just running around on stage, not posing — just kind of feeling it, like somebody in a trance or something. I said, ‘That guy is rock and roll. That guy is real.’ So after the show, I went backstage. And [Angus came up to me and said], ‘Oh, Gene Simmons.’ I’m doing a bad Ozzie accent. ‘Oh, Gene Simmons. Yeah. All right.’ [And I said], ‘You’re the guy. What’s your name?’ ‘Angus.’ And then he smiled. And I’ll never forget it, he didn’t have front teeth. I guess at that point they couldn’t afford it. So I said, ‘Let me take you a few blocks away. I wanna sit down and talk with you.’ So he did.”

He continued: “I’ll never forget it, we went to a place called Mel’s Diner, which is in some parts of the world real famous. And there we are at 1 a.m. in the morning. To some people, I’m kind of a big deal, so all the waitresses and everybody gathered around the table. And at that point, they had yet to know who Angus and the boys were, but it was just Angus and myself. ‘What would you like, Mr. Simmons?’ All that kind of stuff. I said, ‘Ask my friend first.’ I’ll never forget it, Angus asked for a frankfurter — instead of a hot dog — and beets. And they looked at each other, and I said, ‘Get the man what he wants.’ So they did. They brought it back. And I’ll never forget, Angus picked up the hot dog without the bun and started biting into it on the sides of his mouth because the two front teeth were missing. And I said to him — I can still remember most of the conversation — ‘You guys are great. I’m gonna make some calls. You’re going out on tour with us.”

Simmons also told SiriusXM that AC/DC were the best opening band KISS ever had. “A band that shares the same philosophy — no matter what any other band is doing, to thine own self be true,” he said. “I’ve said it before but it’s more true now than ever. A lot of people look the same and act the same and do the same thing. Every once in a while, you see a band like AC/DC. Nobody’s like them. We’d like to think we’re unique in that way too.”