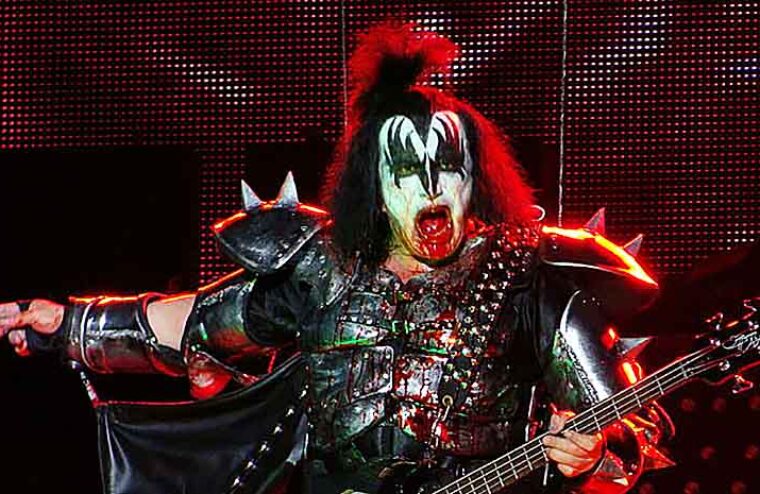 KISS bassist/singer Gene Simmons recently appeared on the “Let There Be Talk” podcast with comedian Dean Delray to discuss a variety of subjects in one of his most candid interviews. KISS is still in the midst of their “End Of The Road” farewell tour, and Delray talked to Simmons about will actually happen when Simmons, Paul Stanley, Tommy Thayer and Eric Singer retire from live shows for good.

“We don’t know if it’s [going to be in] New York,” Simmons said of the final curtain call. “I have good reasons why it should be, but the important thing is when it’s the last show, it’ll be the last show. KISS the touring band will stop. But the touring band. KISS will continue in other ways. I have no problems with four deserving 20-year-olds sticking the makeup back on and hiding their identity.“

“KISS will continue in ways that even I haven’t thought of,” Gene predicted. “But I can conceive of… You know, the ‘Blue Man Group’ and ‘Phantom Of The Opera’ tours around the world with different personnel. There could and should be a KISS show, kind of live on stage with effects and everything else, but also semiautobiographical thing about four knuckleheads off the streets of New York that ends with the last third as a full-blown celebration, a full-on performance. Not with us. Although not a problem stepping in every once in a while.”

In another recent interview with Goldmine magazine, Simmons said the he doesn’t have any friends. It’s hard to believe the 73-year-old “God of Thunder” never palled up with anyone over the years, but Simmons gives a very honest explanation. “Even today as I sit here, other than Paul [Stanley, KISS co-founder], and we only get together when we do stuff for the band… How do I say this without sounding inhuman? I don’t have friends,” Simmons told Goldmine. “Yeah, if friends means, ‘Gee, I don’t know what I’m going to do this afternoon. Hey, you want to come over and hang out?’ I’m more interested in what I want to do, and I don’t want to pretend that I’m interested in what you want to do because I am not.”

Stanley admitted previously that he and Gene have different personalities, but he said the pair are closer now than ever. “He’s my brother,” Stanley said. “His family is my family. I think of Shannon, his wife, as my sister-in-law. We’ve never been closer than we are now. We’ve come so far and done so many great things for each other, it would be ungrateful if we were anything less. We’re there to cheer each other on and text each other. We’re more than good.”

Simmons previously told KissOnline.com that he preferred acquaintances over friends, and he talked about his relationship with Stanley. “Quite honestly, Paul and I don’t always agree on musical changes, or choice of songs, but intrinsically and at the heart of it, Paul is simply the brother I never had. I feel closer to Paul than anyone I know. I have almost no friends. On purpose. I prefer acquaintances. I don’t expect anything from anyone and I don’t want anyone coming to me with their problems. Everyone is a grown up. But I digress. Paul and I live very close to each other and we don’t see each other often. But at the end, he knows I will always be in his corner, simply because I respect him.“