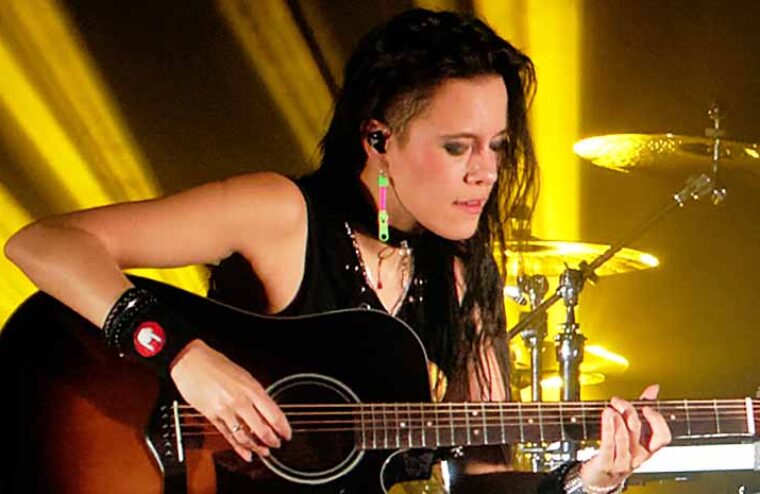 Last month, Evanescence announced they were splitting with guitarist Jen Majura. “It has been a very special chapter in the band with our dear friend Jen Majura, but we have decided it’s time to go our separate ways,” the band said in a statement. “We will always love her and support her, and can’t wait to see what she does next! We are so grateful for the good times and great music we made all around the world together.”

Majura recently appeared on the YouTube show of The Haunted guitarist Ola Englund, and she spoke in depth about her split with the band revealing she is “hurt” by the move. “I believe, honestly, it’s three weeks now since I got the news, and I’m still in this blurry, oblivious momentum,” she said. “I guess I’m still in shock, kind of, because after being married six years, all of a sudden you’re divorced. You know me, I always try to find the positive in a situation, so every day, step by step — I’m not doing great yet — but every day I find little tiny things that I’m, like, ‘Oh, actually, this is good.'”

Majura also revealed how she found out about the firing. “Honestly, I was cleaning my apartment, and I got the phone call. And first of all, I was, like, ‘Is this a bad joke?’ And I remember, after I got the news, I hung up, and I have this hallway in between my studio and my living room, and I just lay there on the floor, staring at the ceiling, wondering what that was, and literally looking over to my suitcase that I had already started packing, because I was two weeks from going out on the road until pretty much the end of the year.”

Majura has fielded calls from other bands to join but is reluctant to jump into a new project just yet. “I would like to consider, but not now, not yet,” she explained. “Because I feel like it would be not a nice move if I played the okay person when I’m still processing. I’m not ready to jump into the next marriage right now. “To be really honest, what I wanna do right now is, first of all, focus on me and my music again,” she said. “Because what I realize is that you, when you… It’s difficult to say… I feel like I lost a little bit of my music inside of me during these past years, because… What I right now do, what I right now want to do is I wanna reconnect with myself and feel and hear and play my music again. And who knows? The plan is, so far — you heard it here first — I’m gonna write my third solo album.”

Majura said she is still “hurt” by the split and appears confused as to the reasons surrounding her firing.  “I’m hurt. I’m hurt and still in this blurry confusion of what just happened.” But she added: “I’m getting there. Like I said, it would be wrong of me if I would play the ‘hey, I’m totally okay’ Jen. It’s tough. And like I said, I’m still not great. But I’m getting there every day with tiny little things that make life beautiful.”

Majura previously clarified the split was not amicable. “I feel the need to address that none of this was my decision!” she wrote. “I have no hard feelings against anybody and I wish Evanescence all the best. I am allowed to carry beautiful memories of these past years, I am grateful.” The 38-year-old guitarist performed for the past seven years with the band.