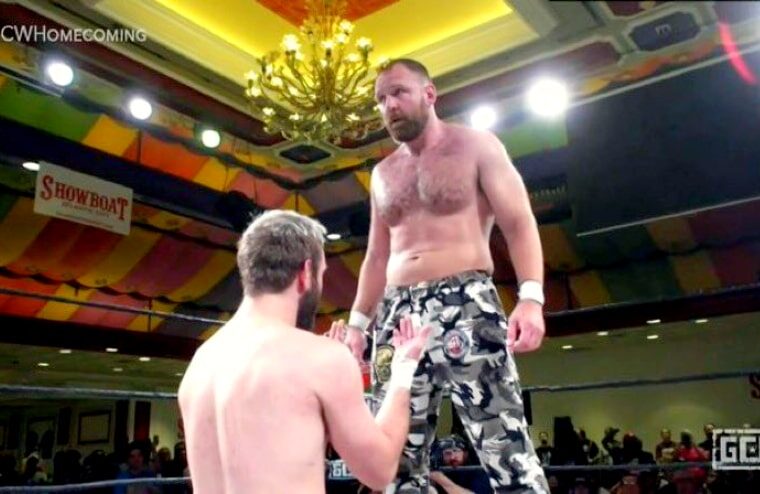 On Saturday night’s GCW show, Jon Moxley successfully defended the GCW World Championship against Effy. Yet, to say the match was controversial would be an understatement. As in addition to criticism of GCW’s handling of Moxley’s entrance through the crowd, fans would also slam spots featured in the bout. The first to draw debate was the one that saw Moxley kiss the openly gay wrestler on the lips, clearly playing mind games with him. And while many wrestling fans didn’t receive that well, the one that caused even more outrage was Effy apparently enjoying himself sexually while being choked by Moxley.

The touching himself spot would result in some fans going as far as accusing Effy of being a sexual deviant and calling him a low-rent Joey Ryan, if such a thing is possible. Now though, the 32-year-old has responded to these fans, seemingly revealing that Moxley came up with these ideas. And considering the difference in status between the two performers, that would make sense, as it is doubtful Effy and GCW’s management would be able to get Moxley to agree to anything he wasn’t comfortable doing.

Both GCW and Effy are a required taste, with many fans who only watch WWE and AEW not accepting of their type of content in pro wrestling. Yet, GCW is a niche within a niche and caters to what its fans want, with mainstream promotions rarely being as contentious or violent. Ultimately though, if an AEW wrestler hadn’t been involved, this wouldn’t have blown up the way it did, and for GCW and Effy, they’ve received far more publicity than they’ve received had the match just been a typical contest.