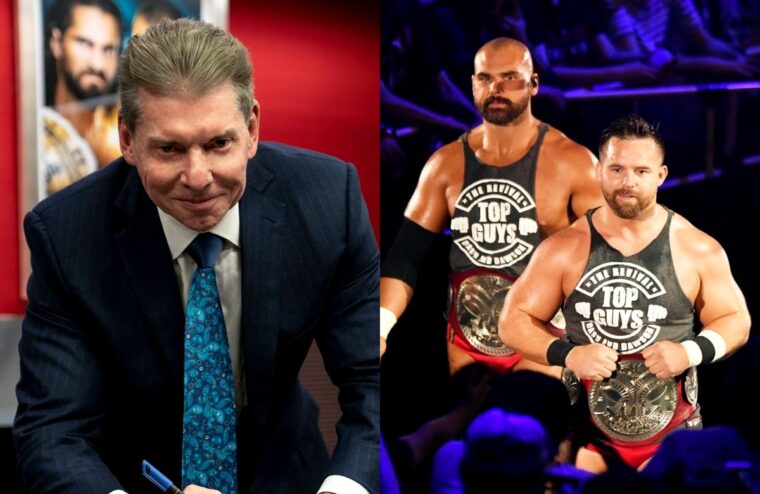 When they were in the WWE, Vince McMahon didn’t want to lose Cash Wheeler and Dax Harwood, and he’d turn repeatedly turn down their requests to be released. McMahon also took the time to personally create a new gimmick for the duo, which involved them wearing flashy colors, having tassels, waving glowsticks, and Wilder wearing a “Shatter Machine” chain necklace. The pair objected to this and were still unhappy with WWE’s portrayal of the tag-team division, citing Braun Strowman and a 10-year old winning the Raw Tag Team Championships as their example.

Currently, the partners are having a successful run in AEW, and it’s doubtful they regret leaving WWE. Now in an interview with DAZN, they would be asked about their new boss Tony Khan and whether he gets the credit for everything he has achieved. Harwood would go on to say that Khan is unfairly criticized and shot down claims he is a money mark and instead claimed that it was McMahon who was actually a money mark.

Vince was a money mark if you think about it. He had to buy a company from his dad, and he had the money. Dax Harwood

Whether Vince McMahon would clarify as a money mark is debatable as the typical definition is a wealthy person who invests in a promotion to rub shoulders with the wrestlers. While multiple promoters have been labeled as such over the years, McMahon isn’t usually listed among them due to his ruthless business practices.

McMahon actually grew up poor, and once reconnecting with his father, who owned the then named Capitol Wrestling Corporation, he’d negotiate to purchase it from his fathers and partners Gorilla Monsoon, Arnold Skaaland, and Phil Zacko in 1982. He would pay approximately $1.7 million, which would be almost $4.9 million in today’s money. However, it should be noted he was permitted to pay in installments, allowing him to use the promotion’s ongoing profits to make the payments which are likely terms nobody else would have been given at the time.