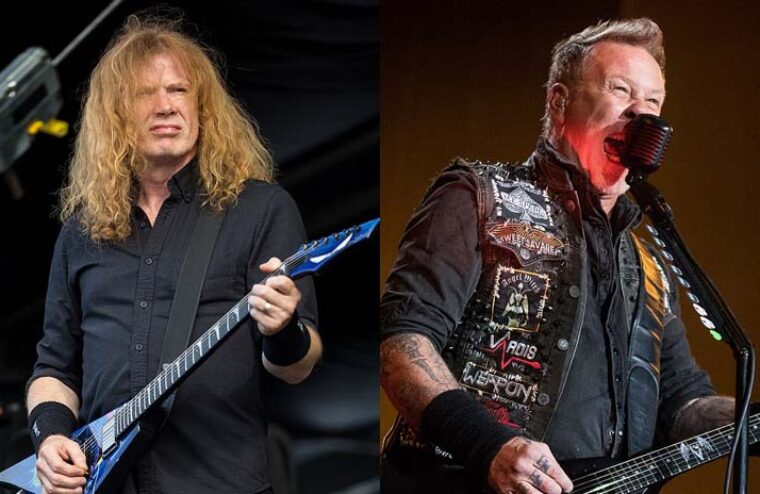 Earlier this month, Megadeth released their new album, “The Sick, The Dying… And The Dead!” The album sold 48,000 equivalent album unites in the U.S. in its first week to land at No. 3 on the Billboard 200 chart. It also marked the band’s eighth top 10-charting album. The record features 12 new tracks and two cover songs.

Megadeth mainman Dave Mustaine has been making the publicity rounds to promote the record, and he recently told Vinyl Writer Music that he hopes to collaborate on new music at some point with Metallica’s James Hetfield.  “I think the world really does want us to do that, and I think there is a pretty good possibility of it happening down the line,” Mustaine said. “I do think that it’s possible that one day James is going to come around and that he and I are going to be able to do something together again. I guess that’s one of the things that has always kept me pushing forward. I think it’d be good for Megadeth, and it could be great for Metallica too.”

Previously, Mustaine talked to Revolver about his relationship with Hetfield. “I saw the thing with James on stage where he was saying that he was going through a rough patch,” Mustaine said. “I was sad to see that because it’s been one of those really weird love-hate relationships. And the whole reason that I ever even pursued any of this was I really liked those guys. If I didn’t like ’em, I would just say, ‘F*cking flush the toilet and be done with it.’ He’s always been somebody that I really liked playing with. I wished things wouldn’t have ended the way that they did. But que sera, sera.”

Mustaine said back when he was in Metallica, he slugged Hetfield, and he thinks it led to his dismissal. “It was a dumb thing that I did by taking my dog up to practice, and it was even dumber to punch [James]. I really respect him and I respect his playing. And I hope he knows that there are a lot of people out there, like me, that like him as a person and don’t give two f*cks about him being in Metallica.”

It’s not the first time Mustaine has talked about reuniting with his former Metallica bandmate to work on music. In 2012, Mustaine hoped to form a supergroup with himself, Hetfield, then-Megadeth bassist David Ellefson and Metallica drummer Lars Ulrich. Hetfield laughed the idea off at the time in an interview with Metallica’s fan club magazine. “I see [Mustaine] healthier now. I see him as less of a bitter guy. But I do see a lot of stuff in the press with him talking about jamming with us and making an album. All this other crazy stuff. I read it and say to myself, ‘Hold on. This is the Dave that we kind of wanted to forget about. You know, the big-mouth that wants to just go-go-go. But there is an authenticity about him when he speaks. He doesn’t think too much before he does. He just goes off the cuff. Plus, when he says stuff like that, it’s well-intended.”