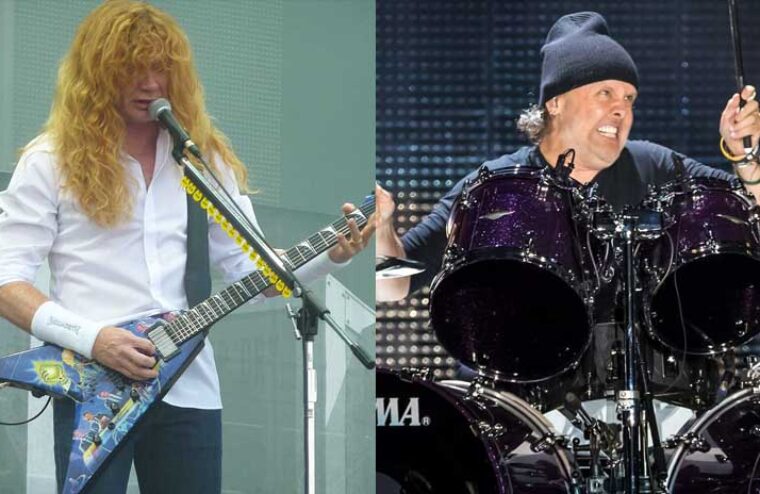 Megadeth frontman and former Metallica guitarist Dave Mustaine recently spoke with Guitar.com about why the re-release of Metallica’s “No Life ’Til Leather” demo hasn’t happened. Mustaine said he’s had a falling out with the band over royalties on the band’s early material, some of which the Megadeth leader helped co-write.

Mustaine elaborated on those comments in an interview with Songfacts’ Greg Prato.

“The last time we talked it didn’t end very well because we have some memory of a couple of things that took place when I was in the band,” Mustaine said. “I remember it one way and (James) is saying that it happened another. But it’s about somebody else — it’s not even him. He’s talking to me on behalf of ‘you know who’,” apparently referring to Metallica drummer Lars Ulrich.

“They wanted to release ‘No Life ‘Til Leather’ — 27 songs, posters, flyers, pictures, everything. I said I would love to do this thing, and James said, ‘Look, we f*cked up. The last three things we’ve done failed abysmally.’”

“He said it was ‘Lulu’ [Metallica’s collaboration with Lou Reed, released in 2011], something called Orion [a festival called Orion Music + More that took place in 2012 and 2013], and there was one other thing… I think it was a film about a fan or something [the 2013 film ‘Metallica: Through The Never’]. I don’t know. I don’t see them as a failure. But I had said, ‘Yeah, I’d be interested.’ And he said, ‘We’d like to get everything right with all the history, the publishing and stuff.’ And I said, ‘Good.’ Because part of the reason why we haven’t been able to really reconcile is because I had songs that when I left I didn’t want them to record, and they went ahead and recorded them but they didn’t pay me what my share of the songs were.”

Mustaine went on to say: “James and I wrote ‘Metal Militia’ and ‘Phantom Lord’ — every note. And somehow, on the record [‘Kill ‘Em All’] it says Lars gets 10%. And on ‘Metal Militia’ that Kirk [Hammett, Metallica’s current guitarist] gets some of it, and he wasn’t even in the band.”

Mustaine said Metallica didn’t give him his fair share, and then he had some harsh words for Ulrich.

“So I’ve come to terms with it, and when he said, ‘We’d like to get this right,’ I said, ‘Great. Let’s do it. I have no problem.’ And when I said, ‘This is what it is,’ he said, ‘No. It’s kind of what it was, and that’s how it is.’ And I thought to myself, you know what? When you guys did that to me before, it was not cool. I said, ‘Don’t use my stuff’ and you did it, and then didn’t give me my fair share. So why would I want to willingly enter into something like that? I wouldn’t. So that’s where we stand right now.”

“I would love to work with James. I’d like to work with Lars again, too, but I think the real talent in Metallica has always been around the guitar — everybody makes fun of the drums.”

Mustaine then tried to compliment Ulrich, but it didn’t exactly come off that way.

“Lars is a really great song arranger. And believe it or not, I watched him on a piece-of-sh*t acoustic guitar write the opening riff to ‘Master Of Puppets’. You know what that was? It was a guy with a guitar that doesn’t know how to play, and he’s going [mimics playing a chromatic run] on the neck. It wasn’t anything really mind-blowing by any means. The way James played it made it mind-blowing.”