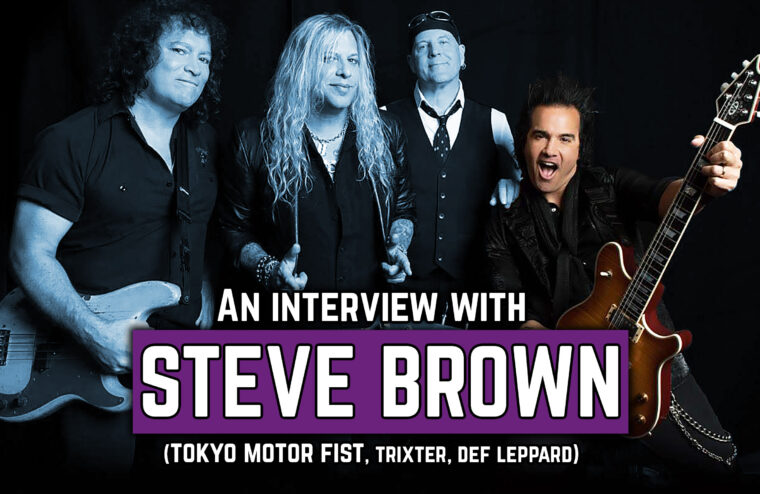 Steve Brown’s upbeat attitude is almost as infectious as the record he just wrote. The guitarist/producer/songwriter and all-around mastermind for melodic rock outfit Tokyo Motor Fist is beaming with enthusiasm when I give him the call to chat about the band’s forthcoming album, “Lions” — out July 10 via Frontiers Records — and his mood is every bit justified.

“We’re all about our influences,” Brown said. “We’re lucky to be on the label that showcases that. When you’re on Frontiers, they want melodic hard rock, and we give them the best of the best.”

Brown is most well-known as the six-string slinger in melodic rock staples Trixter, whose 1990 hit, “Give It To Me Good,” topped the MTV video charts for more than a month and still gets regular airplay on the satellite and FM airwaves. Brown has also spent the last eight years in the bullpen for rock titans Def Leppard, filling in for live dates whenever he gets the call.

His crowing achievement creatively, however, is Tokyo Motor Fist, and “Lions” is 11 tracks of all-killer, ultra-catchy melodic rock.
“I think it’s the best work I’ve ever done in my life as a producer, engineer, songwriter, backup singer, and as a guitarist, it’s the best playing I’ve ever done,” Brown said. “And all of us outdid ourselves as a band.”

Tokyo Motor Fist — the band’s name comes from Brown’s love of Tokyo, Motorhead and fist-pumping, anthemic rock — is rounded out by Danger Danger vocalist Ted Poley, Ted Nugent bassist Greg Smith and Rainbow/Blue Oyster Cult drummer Chuck Burgi.
The aforementioned “influences” would be all over Brown’s sleeves if he ever wore any. Subtle homages to Def Leppard, Bon Jovi, Kiss, Cheap Trick and Van Halen are scattered throughout “Lions.”

“No matter how bad things in life can get, if you listen to our music, it’s gonna make you happy,” Brown said. “It’s gonna take you to a different place.”
Brown recently chatted about all things “Lions” and Tokyo Motor Fist.

Q. At this stage in your career, does it get more challenging to write quality songs without repeating yourself?
A. “It does a little, but here’s the thing … As the mastermind behind the band, I never stop writing. I started Trixter when I was 12 years old, and I started writing songs when I was 10 years old, and I’ve just never stopped. I’ve been lucky to have the God-given gift to be able to do it, and it’s really not hard for me. I don’t know what it is, but I am playing and writing music in the style that I do best, and it’s my favorite kind of music: melodic hard rock and pop rock.
“One of my little tricks that I’ll share, to try to not repeat yourself you look at your releases, and you go, ‘What kind of song do I not have? Have I never recorded a Van Halen-style shuffle? Have I never recorded a slow rocker like ‘Women’ from Def Leppard?’ Those are little things that I do. Or I’ll hear a song from another band, and I’ll go, ‘I want to have a song that feels like that.’ You use what’s already there as influences, and it seems to work for me.”

Q. There’s been a real resurgence in ’80s/early ‘90s melodic hard rock especially with the Frontiers label. Have you also been seeing that resurgence in the live show?
A. “I’ve been seeing it for the last 10, 15 years. Ever since ‘Rocklahoma’ started in 2007, there’s certainly been a resurgence in the ’80s hard rock thing, or ‘hair metal,’ but I hate that term. My good friend Eddie Trunk goes ballistic every time someone says ‘hair metal.’ But SiriusXM has the channel called ‘Hair Nation,’ so you can’t fight it, and I’ll take it. I don’t think the Bee Gees are complaining when they cash their royalty checks that they’re a disco band, if you know what I mean.”

Q. How did the writing and recording process for “Lions” compare with the band’s self-titled debut a few years ago?
A. “It was very similar in the sense that yours truly is the brains behind it. I need to have a couple songs I’m comfortable with to be ready to make a record. I don’t do demos. Basically, I make a Steve Brown solo record. I play everything and program the drums, and I do pretty much finished versions of the songs with just me. Then I send it to the guys and say, ‘I need you to take what I did and go up another 100%.’ And that’s what each of the guys do. They put their own personality in there, and that’s what makes a Tokyo Motor Fist Record.

Q. Getting into some of the individual tracks from “Lions,” give me your thoughts and some background on:

“Youngblood” — “It was actually written for a project that (Trixter bassist) P.J. Farley and I were doing with Eric Martin from Mr. Big called Eric Martin and the Trixters. ‘Youngblood’ was written for that, but for some reason, Eric just wasn’t into doing it. So I finished it and it became a Tokyo Motor Fist song. I sent it to Ted, and he was like, ‘Dude, this is the best song I’ve ever heard in my life!’ (Laughs). I said, ‘Alright, we’re on our way to a new record!’”

“Monster In Me” — “That one has a huge Mutt Lange/Def Leppard influence which you can hear. People ask me all the time if Def Leppard is an influence on me, and playing with them for nearly a decade, how could they not be? And even years ago, they were the band when I was 10 years old in 1980 when I discovered them, because they were so young. Rick Allen was 15 years old when they signed their record deal. When I saw that, I was like, ‘I’m gonna start my own band, and I’m gonna be even younger.’ I think we knocked ‘Monster In Me’ out of the park, and it’s got the huge Def Leppard feel, but its also got a unique message. We all know sometimes what happens to people when they have that Jeckyll and Hyde in them and they become that monster. For me, it’s near and dear to my heart, because I’m coming up on 14 months of sobriety. I certainty lived the rock ’n’ roll excess life for 35 years drinking and partying too much, and I had to pull myself back, because I was becoming a monster of sorts. As cool of a song as it is, it also has a deep meaning.”

“Mean It” — “That’s what I call the obvious track. If anyone is new to the band and doesn’t know what the band is about, listen to ‘Mean It.’ That’s the cliff notes of what we are. Listen to that, and you’re gonna be happy. There’s absolutely no deep meaning to the song. It’s a wink-wink, ‘love me like you mean it’ in bed. It’s a song about just having some fun. It’s a combination of everything you would love about Tokyo Motor Fist, Trixter, Danger Danger, Def Leppard, Bon Jovi, Van Halen, Cheap Trick and Kiss.”

“Blow Your Mind” — “It rocks but it’s a little slower. It’s definitely a rock ballad, and it almost has a little bit of the pop country vibe to it. It’s another great, fun song but has little bit of a darker lyric. But at the end of the day, it has what I like to put in all my records, and that’s positivity. And that’s what that song is about. It’s about a girl in a shitty relationship who needs someone else to take her to a new life and that’s gonna blow her mind. I think that hits home for a lot of people.”

Q. Tokyo Motor Fist has played a handful of live dates over the past few years including most recently on the Monsters of Rock Cruise. Once the pandemic dies down, is the plan to tour a little more regularly?
A. “That’s in the works. We had dates booked in Japan and a couple festivals in the states. We’re just waiting for things to open up, but it’s not looking too promising right now. There might be one or two dates by the end of the year, but hopefully we’ll be able to hit it up hard next year.”