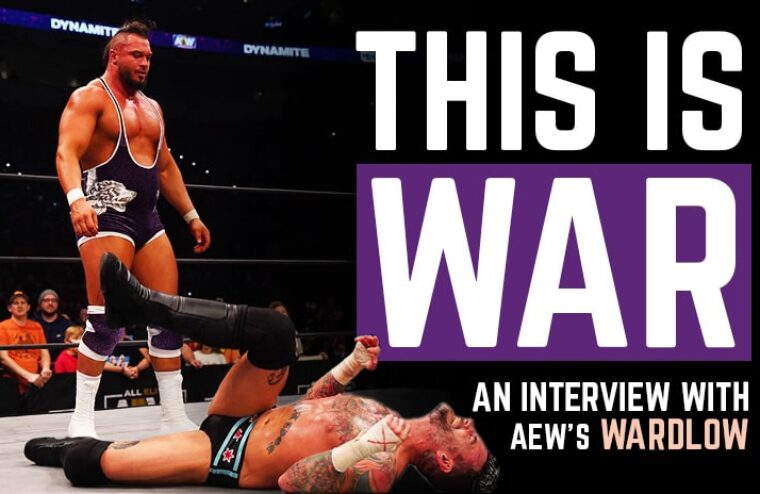 The very first time he wrestled on network television, Cleveland native Michael Wardlow found himself in a steel cage with the son of “the son of a plumber,” a wrestling standout and staple from a legendary lineage, Cody Rhodes. The show, airing live on TNT, was All Elite Wrestling’s “Dynamite.” The site was Atlanta’s State Farm Arena. And in terms of a wrestling debut, the lights don’t get much brighter. Fortunately for the 34-year-old Guardians, Cavaliers and Browns fan, the bright lights only make him better. “Man, you couldn’t have put any more pressure on me if you tried,” Wardlow said. AEW’s northern Ohio bruiser is set for a homecoming show on Wednesday night in Cleveland for the company’s “Beach Break” show on its new network, TBS.

“Kenny Omega is at the top of that list. People say he’s the best in the world, so why not start there?“

Wardlow on his dream opponent

“I knew they took a chance on me,” he said. “Nobody really knew of me before AEW. I wasn’t that well known on the independent scene. I had really just started expanding on the indies when I signed to AEW. They really didn’t know what I was all about.” Following a hard-hitting match, Rhodes eventually landed a moonsault from the top of the cage onto Wardlow for the win. But Wardlow’s first on air experience had been an overwhelming success. “I thrive on pressure, and I perform my best when they stack the pressure on me,” Wardlow said. “So, the more I’m nervous, the more I know the outcome is gonna be great.”

Wardlow talked at length about his career recently for a Web Is Jericho interview. Here’s Wardlow on …

When he got bit by the wrestling bug: “I knew when I was in elementary school. It was just one of those things that captivated me at an early age. I just knew with my whole heart that that’s what I was gonna do with my life.”

How being from northern Ohio shaped his work ethic: “I currently live about 15 minutes east of Cleveland, but I was born and raised in Middlefield, Ohio, which is about 45 minutes east of Cleveland. (It’s a) very, very small little country, Amish town. The way that affected me was it was a small town with not a lot to do at all. So we spent the majority of our time either on a trampoline or pulling our mattresses out to the backyard and wrestling. It was kind of all we had to do.”

Cheering for Cleveland sports teams: “I most definitely enjoy watching the Browns. I’m a big Myles Garrett fan. Indians, I was a huge fan of growing up as a kid. When I was a child the All Star team of Albert Belle, Manny Ramirez and just those whole ’95-’96 Indians teams were incredible. And the obviously it was a joy to be a Cavs fan when LeBron was here. I was actually downtown when they won the championship, and that was a wild night.”

How he caught the attention of AEW, and what he thinks of the company’s progress: “I knew when I spoke to Cody, and he spoke about their vision of AEW, I knew it was gonna be something special. Did I expect all of this so fast? Not necessarily. When I first linked up with them, it was kind of all the stars aligning, it was kind of like that perfect storm scenario where he heard my name from three or four people all within a few weeks’ span where it got to the point he said, ‘Alright, I keep hearing this name, let’s invite him down to Atlanta and see if he’s serious.’ QT (Marshall) called me one day, and said, ‘If you fly yourself to Atlanta, we’ve never done this for anybody, but if you fly yourself down, we’ll take a look at you and go from there.’ So I booked a flight as soon as I got off the phone, showed up and showed them how serious I was, and they recognized that right away. About 5 minutes after meeting Cody, and him watching me work in the ring, he offered me a deal.”

Where he learned to wrestle: “My first training experience was at the Cleveland Dungeon. It was very much a dungeon. No heat. No A/C. Very worn down building in a bad part of town. There was a guy, Lamont Williams, that was running it at the time. He had moved to Texas only about a month after I started training. I was then introduced to Matt Justice, and he started up a little training facility, and I ended up working with him a lot. And he taught me quite a bit. Then it kind of extended over to IWC in Pittsburgh, where Britt Baker came from.”

Who has given him the best advice at AEW: “There’s so many. FTR and (Shawn) Spears are always the first guys I mention. Obviously being a part of The Pinnacle, I’ve spent a lot of time with those guys, and they have so much knowledge for the business, it’s unbelievable. Just human encyclopedias, and they’ve given me so much knowledge and advice along with guys like Jerry Lynn, Arn Anderson, Paul Wight, Mark Henry. There’s so many people that genuinely want to help. I feel like QT and Cody are always my go-to guys, and Billy Gunn is usually the one that gives me something to work on every single week, which I appreciate dearly.”

Working with MJF: “Man, what a roller coaster. You know, he’s a unique character, and he has his moments where things are great. But for the most part, I’ve seen him disrespect people on an astronomical level, just the things he says and does to people that he thinks is OK or appropriate, and they’re not. But at the end of the day, he pays me to protect him, so it is what it is.”

If he wants to do more promo work in the future: “Absolutely. My character on TV really isn’t a character. My last name is Wardlow. Who you see out there is me. There’s different sides to me. Outside of the ring, I’m usually a very quiet person, so that’s very similar. Outside of the ring I also used to be the maniac you see inside of the ring, but that gets you in legal trouble. I get to be myself in the wrestling ring without having to worry about going to jail for beating somebody to a pulp. So it’s very much me. But as you can tell, once you get me talking about something I’m passionate about, I can talk. And I am excited for people to see, ‘OK, he’s not just a body. He’s not just a look. He’s not just strength. He can actually go on the microphone as well.’ So i’m looking forward to that.”

How the idea for the Powerbomb Symphony came up? “Jericho just kind of tossed around the idea of me doing multiple power bombs. Then it just started growing, and the crowd started chanting ‘One more time.’ It kind of organically grew into this thing. Then Tony one day, was just like, I’m gonna call it the ‘Powerbomb Symphony,’ and it was like Tony’s baby and Tony’s creation. It’s just really taken off, and I feel like it’s just gonna get more intense with the crowd chants. Realistically, we’re probably gonna go from 3 or 4 powerbombs, to 5 or 6 to maybe 8 to 10. The more the crowd chants, the more the energy just surges through me and the more I want to continue powerbombing people.”

Working with CM Punk: “It’s been over a week now, and I still wake up thinking about it. CM Punk is one person that you just never thought you would have the opportunity to share a ring with. That was the one guy you just crossed off the list, because you thought it was never gonna happen. So, for that fact alone, it’s historical, the fact that I got to wrestle CM Punk. And then the fact that I just pummeled him, an absolute legend, the biggest star in pro wrestling, I pummeled. I think that says a lot. But last Wednesday meant the world to me, and I’m still on a high from it. Even though I lost (the match), I certainly won. It was an incredible experience all the way around.”

Dream opponents: “Kenny Omega is at the top of that list. People say he’s the best in the world, so why not start there? I don’t want to be just a big guy. I’m not just size. I’m not just a look. I can go. I think the way you test that is going with Kenny Omega. I would really like to have another shot at Cody Rhodes and ‘Hangman’ Adam Page, just because I have two L’s from them that I would like to correct.”

If there is any added pressure working in his hometown for “Beach Break”: “I’m curious to see. I almost feel like I’m gonna be a little more relaxed. Have that home court advantage. I think it’s gonna be more of a fun experience.

What 2022 has in store: “If 2022 started off with what happened with Punk, I’ve gotta imagine the rest of the year is going to be pretty wild. My immediate goal, Max would like me to qualify for The Face of the Revolution ladder match, so I can win the TNT title for him. So I think my immediate goal is to win the TNT title. Then we’ll see beyond there what other titles I can get my hands on.”